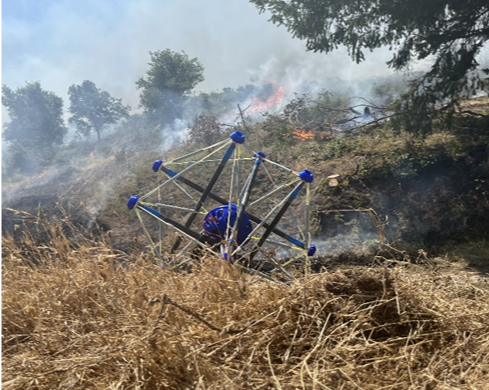 Squishy Robotics is honored to announce that our tensegrity design concept was awarded the 2022 Silver prize by the International Design Awards (IDA).

“The communication of time-critical, life-saving data to first responders consists of both the reliable transmission of data—a task that often must be performed in less-than-ideal situations—as well as the presentation of data in a way that is easily digestible and actionable,” said Squishy Robotics COO Deniz Dogruer. Squishy Robotics sensor robots and associated software need to excel at both to better ensure the safety of the first responders that employ our products. “This grant will help our company to improve product communications as well as to conduct significant user experience testing that we believe will result in important first responder-recommended product improvements.”

Squishy Robotics has recently begun a year of testing communications equipment, protocols, and software, which is funded by a NIST PSCR grant award. The Public Safety Communications Research (PSCR) Division of the National Institute of Standards and Technology (NIST) is a federal laboratory that focuses on evaluation of and improvements for public safety communications technologies. NIST is a non-regulatory agency under the U.S. Department of Commerce that develops standards that apply to various industries.

Squishy Robotics sensor robots and executive and engineering team members are featured in a recent episode of Horizons: On the Record that focuses on growing green jobs that can help combat climate change. CEO Dr. Alice Agogino, COO Deniz Dogruer, and Lead Mechatronics Engineer Douglas Hutchings discussed how our company robots and technologies are helping in HazMat response and in wildfire mitigation.

Billed as “the most realistic and immersive UAS training conference in the World,” the Unmanned Tactical Application Conference, or UTAC 2022, took place at the end of October. Squishy Robotics was a proud sponser of UTAC for the second year in a row.

Squishy Robotics is honored to be a recipient of a 2022 East Bay Innovation Award. The East Bay Economic Development Alliance (EDA) selected Squishy Robotics as this year’s winner in the Engineering & Design category, announcing the prize as part of an August 8th ceremony honoring the finalists from the more than 200 nominated companies and […]

Company sensor robots were once again deployed at a Northern California prescribed burn event to gather data and perform tests to support company efforts in the development of a solution for the early detection of an emergent wildfire.  Squishy Robotics interns Oliver Parkin and Jiaqi (Harold) Lian and COO Deniz Dogruer collected atmopheric data and observed fire crews […]

Squishy Robotics CEO Alice Agogino was an invited speaker at the 2022 International Conference on Robotics and Automation (ICRA).