Alice M. Agogino, Co-Founder and CEO of Squishy Robotics and Professor of Mechanical Engineering at UC Berkeley , was honored with the Presidential Award for Excellence in Science, Mathematics and Engineering Mentoring from the White House Office of Science and Technology Policy (OSTP) and the National Science Foundation (NSF). Established in 1995, the award honors is the highest US award for teachers and mentors. Presidential awards express the nation’s gratitude for dedication to teaching and mentoring.

Announced on June 25 by the White House Office of Science and Technology Policy and the National Science Foundation, Agogino was one of  27 individual honorees to receive the Presidential Mentoring Award at a ceremony yesterday at the Smithsonian American Art Museum in Washington, D.C..

Dr. Alice Agogino derives her motivation to mentor from her own personal experiences as the only undergraduate woman in mechanical engineering at the University of New Mexico. As a mentor to hundreds of students and numerous junior faculty at the University of California, Berkeley, Agogino is internationally recognized for her contributions to both mentoring and cutting-edge mechanical engineering research and education.

Agogino’s mentoring strategy includes tiered mentoring through which her senior doctoral students mentor M.S. and undergraduate-level students. Together, they foster a robust learning and research network, along with embedding a culture of mentorship. Currently, she and her team at Squishy Robotics are mentoring a team of eight interns at the undergraduate and graduate level. Squishy Robotics, a majority female-owned start-up at SkyDeck designs rapidly-deployable mobile sensing robots for disaster rescue, remote sensing, and space exploration.

To elevate the talent of students from underrepresented groups, Agogino utilizes a strategy she calls “designing for diversity,” which helps her mentees tackle research problems that are both important to the human condition and that appeal differentially to women and ethnic minority students, motivating them to engage and persist in engineering. Through a NSF Distinguished Teaching Scholar Award, Dr. Agogino developed a course series on her approach, for which she won the 2010 Chancellor’s Award for Community Service. “Designing for diversity,” she says, “helps students find their own engineering pathway to success in their profession with positive social impact.” Outside of the university setting, Dr. Agogino has forged collaborations with local schools, museums, and community organizations to tailor engineering experiences to K-12 students and inspire their interest in STEM fields.

Dr. Agogino is a prolific mentor. She has graduated 53 doctoral students and 193 M.S. students in engineering, nearly half of them from underrepresented groups. She has also advised over 1,000 undergraduate students, all but one of them successfully completing the baccalaureate in engineering. Dr. Ryan Shelby, a former mentee of Dr. Agogino and now energy engineering advisor to USAID, calls her “… an ardent guardian and supporter of diversity, equity, and inclusion efforts designed to increase the number of highly qualified women, first-generation college, and underrepresented minority students graduating with advanced degrees.”

With an equally fruitful publication record (over 300 peer-reviewed papers), Agogino has won over ten best paper awards on her research and is a Member of the National Academy of Engineering with citation for applications of artificial intelligence to manufacturing, and for reform efforts in engineering education. Among her other extensive awards and recognitions, she is a recipient of the 2012 AAAS Lifetime Mentoring Award, with the citation reading: “For efforts to significantly increase the number of women and African- and Hispanic-American doctorates in mechanical engineering.” 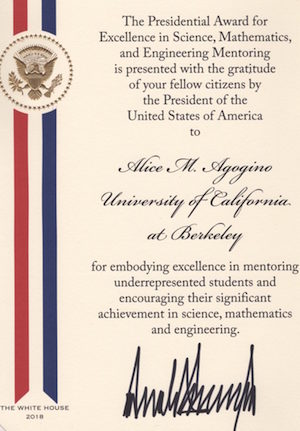